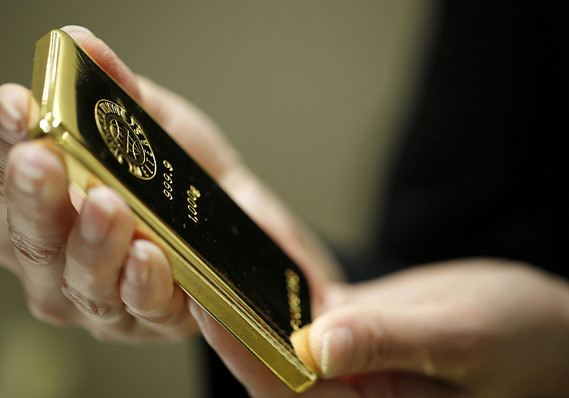 Gold on the rise

was 0.6% lower Wednesday, retreating after earlier moves drove the buck higher on expectations of an increase in benchmark interest rates by the Federal Reserve as soon as next week. The Federal Open Market Committee concludes its two-day monetary policy meeting Dec. 16.

A weaker dollar lifts the appeal of dollar-denominated precious metals like gold, making them less expensive to buyers using other monetary units.

After tumbling to a low of $1,046 an ounce in early December, gold prices have held relatively steady in the face of expectations of a rate hike, which can diminish the attractiveness of assets that don’t bear a yield.

Colin Cieszynski, chief market strategist at CMC Markets, said in a Wednesday research note that relative strength indexes suggest that gold’s “momentum has shifted from downward to neutral with an upturn awaiting a bullish cross” of the midpoint of the RSI. From a technical perspective, he said, hitting above the midpoint of the relative strength index would indicate bullishness while falling below that level suggests bearishness.

However, Joni Teves, UBS analyst, warns that pessimism persists. Teves notes that the number investors willing to make “net speculative longs” for gold ahead of the FOMC meeting are “at the lowest in 14 years.”

A risk of investors covering some of their negative bets against gold might provide a bounce higher, market strategists have said.

Korn/Ferry International said revenue jumped 10% in its latest quarter, as fee revenue soared on the acquisition of Hay Group.

Chief Executive Gary Burnison said Korn/Ferry generated the strongest top-line results in the company’s history, as fee revenue rose 9.7% to $280.6 million–or 16% on a constant-currency basis. He also pointed to the acquisition.

In September, Korn/Ferry announced it would buy the human-resources consultancy for about $452 million in cash and stock, splitting the focus of the company evenly between recruiting and employee-staffing management, with Korn/Ferry offering clients help with organizational design, compensation and leadership development, in END_OF_DOCUMENT_TOKEN_TO_BE_REPLACED

Anglo American has overtaken its rival Glencore to become the FTSE 100’s worst performer so far this year, a day after it announced a radical restructuring plan as it battles the collapse in commodity prices.

Shares in Anglo American have nose dived 76.5pc since January, compared with Switzerland-based Glencore, which is currently nursing a loss of 74.65pc across the same period.

About 1,200 jobs are set to go worldwide as company tries to improve profitability

Trade surplus widened to €20.8bn from €19.2bn in October versus September